The Ken-Caryl Ranch Master Association Board adopted the 2022 Master Association Budget with a $4 per month dues increase. This year’s resident survey showed that 77% of residents would tolerate a dues increase, and residents also requested additional shade at pools and parks, as well as increased special events. The Board took this feedback to heart and incorporated these items into the 2022 MA Budget.

After a lengthy public process to gather feedback, the Stove Prairie Trail reroute will not move forward. Stove Prairie is an existing trail in the North Ranch that runs from Bradford Trail to Manor House Trail.

The proposed realignment was recommended to the Board by the Open Space Committee and was developed by the Volunteer Trail Coordinators. The Board heard extensive feedback from residents on both sides of the issue. Ultimately, the motion to reroute the trail was defeated with a 2-2 vote, which means the motion failed due to lack of majority. Board members Scotty Martin and Dave Seagraves voted against the reroute, and Board members Tom Bratschun and Chris Schroeder voted in favor of the reroute. Board member Philip Varley was not in attendance at the meeting.

Information about Stove Prairie, as well as resident comments received regarding the project, are all available on our website on the Rules, Plans & Studies page. 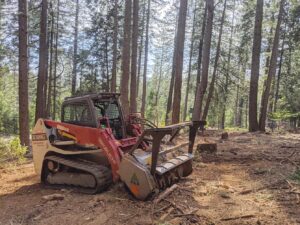 To mitigate wildfire risk in the open space, forestry contractor Ace Tree Care Inc., will be performing mastication work in about 20 acres of established fuel breaks along the Summit View Trail, Beacon Hill Trail and Tin Cup Campsite. Mastication is a forest thinning practice that uses heavy machinery to mulch trees and shrubs to create fuel breaks in the understory. This helps slow down fire as it moves through the forest. The goal of this project will be to clear the Gamble oak under high value trees and in the already established fuel breaks in this area. 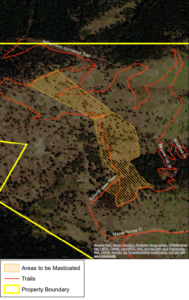 associated image) and can be a serious hazard to anyone near the machinery while it is in use. Because of this, we please ask that you always stay at least 300 yards away from the equipment. There will be caution signs posted at every intersecting trail, so please be vigilant and follow all instructions on the posted signs. The project will likely start the week of Nov. 22 and will last about a week. If you have any questions or concerns, please contact Natural Resources Specialist Liam Cullinane at 720-599-3247, or at liamc@kcranch.org.

The MA and MD have three playground replacements planned for 2022. North Ranch Park, Brannon Gearhart Park and Territory Park are all getting new playground equipment! Staff is in the process of gathering feedback from the community about what equipment will meet community needs and desires. Please find additional information at the Parks page of the website.